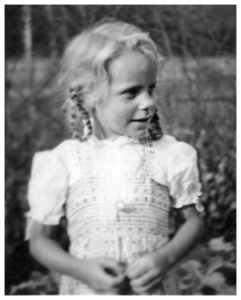 Eycke Laabs Strickland was born in the heart of Germany the year Adolf Hitler came to power. When she was two years old and watched her father soar in his glider plane, she believed that he had wings. When she was five and heard the word “war” for the first time, she understood that it was something to be afraid of. In 1939, when she was six years old, World War II broke out. She saw the adults wring their hands and heard them whisper about the trouble a man named Adolf was getting them into. Nobody explained to her who Adolf was, but she decided that it had to be his fault when her father was drafted to build airfields and had to close his architectural firm and kiss his family goodbye.

In 1941, her father was transferred again, this time to a small town in southwestern Poland, where as county architect he supervised public construction projects. The town was located eleven miles east of Auschwitz. A year later, his family was ordered to join him. The dilapidated cottage and gardens at Auschwitzer Strasse were a paradise for children, but outside their gate, the horrors of the Holocaust unfolded before their eyes. On her way to school Eycke heard the cries of imprisoned Jewish families. One of her brothers saw shadowy figures disappear into their barn. Despite posters warning, “Those who help Jews will be killed,” her parents befriended a Jewish family. Her mother stood up to Nazi officials who tried to intimidate her. What Eycke did not know is that her father was risking his life by hiding and rescuing large numbers of Jews. A Gestapo agent kept a watchful eye on her family. When agents came to arrest her father, he outwitted them. Miraculously, they let him go. He was drafted into the Luftwaffe, where he trained young boys to fly gliders.

During the middle of January 1945, with temperatures of minus 22 degrees, Eycke’s family of seven hurried through the snow to flee Poland on the last available train. Despite being bombed and strafed during the long journey, the family arrived in Germany, hungry and exhausted but grateful to be alive and together. At the end of March, the front came closer and the town was bombed. Under cover of darkness, to avoid being strafed they trekked seven miles up the Weser River to the village they had called home before the war. A few days later, from the basement of the parish house where they had found refuge, artillery shells screamed over their heads blowing up German positions across the river. On April 6, the American troops arrived and a month later Germany surrendered. The book concludes with her family’s struggle to survive as refugees in the midst of a society near total collapse.

Only guard yourself and guard your soul carefully lest you forget the things your
eyes saw, and lest these things depart your heart all the days of your life. And
you shall make them known to your children, and to your children’s children.
—Deuteronomy 4:9